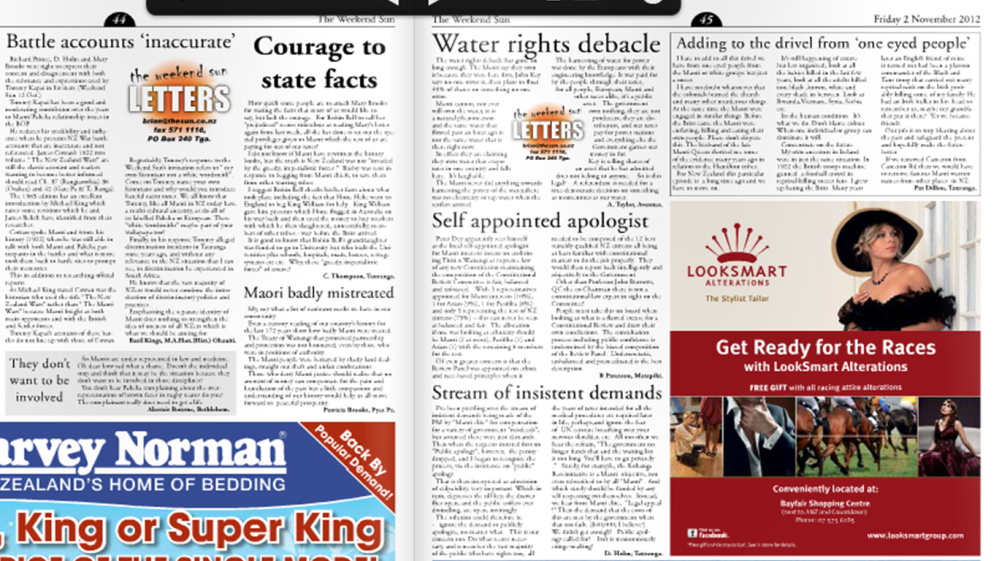 The city’s venue owners may be a cowardly lot, but the letter-writers and Sunlive newspaper are anything but.

Above (and split out below) is yesterday’s letters page from the Weekend Sun.

Note how it’s entirely given over to Treaty issues. And look at the ratio.

Seven of the letters express a racial equality position, and one defends the Griever Maori position.

Is this unfair? Hardly.

We know that whenever the issue of racial preference is tested, around 80% support racial equality.

So, unlike the Consitutitonal Advisory Panel with its equal Maori and European representation, the Weekend Sun dares to represent its readers’ views accurately.

Mind you, they still parrot the mainstream line in describing me as ‘controversial’…

I look forward to the day when racial equality in New Zealand is not seen as controversial.

Opposite the above story on me is this piece on local kaumatua Colin Bidois calling for us to focus on what unites us.

I agree with him.

I also note that his tribe, Ngati Ranginui, recently accepted $38 million of our money in ‘compensation’, when the tribe had taken up arms against the Queen.

Will Mr Bidois now be urging the return of that money in the spirit of unity and fairness?

Now to those letters. They’re worth a read, so here they are in close-up.

Next, a stout defence of correspondent Mary Brooks for her rebuttal of the all-too-common assertion that the British ‘invaded’ New Zealand. 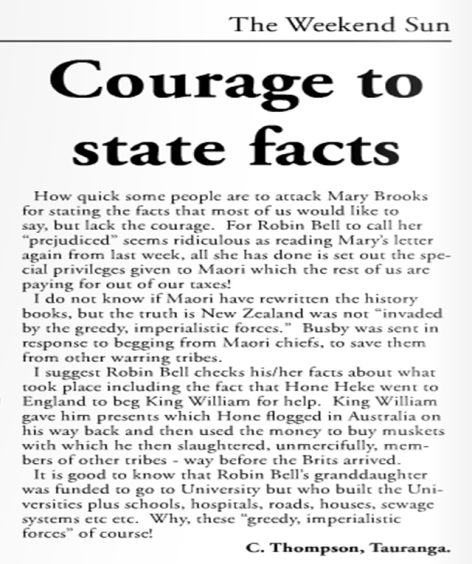 It must be said that C. Thompson’s own facts are not quite right.

It was Hongi Hika, not Hone Heke (his nephew) who went to England in search of muskets then went on the rampage.

And the petitioning chiefs were also concerned about the vengeful French and lawless British escaped convicts.

Now a letter from A. Taylor on Maori ‘ownership’ of water… 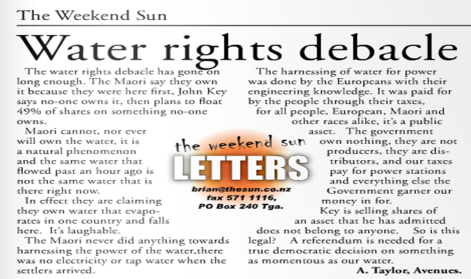 D. Holm rails against the endless demands for compensation from ungrateful Maori…

Irish Kiwi Pat Dillon blames both sides for being one-eyed, then tells Maori to get over their historical bitterness…

And to represent the minority view, another Brooks, Patricia, trots out the standard Treatygater line…

I agree that we need to show Griever Maori a little compassion and no amount of money. 🙂

Those wanting to come to the Tauranga meeting on Monday 12 November at 6.30, please register by emailing john@johnansell.co.nz.

Aucklanders, I look forward to seeing you on Saturday 10 November at 3.15pm at the Greenlane Christian Centre.