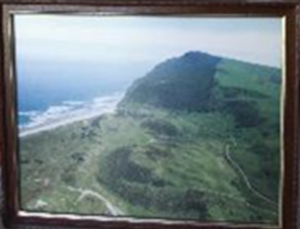 The Maunganui Bluff farm that the Titfords were forced off.
How many other wrongs make that wrong right?

“Historian” Paul Moon has never been one to let a total absence of logic get in the way of a political diatribe.

On the Littlewood document, Moon famously proclaimed that “It can’t be a treaty because it wasn’t signed”.

(Which may sound plausible to a new chum. Until we point out that no proponent of the Littlewood document has ever said it was a treaty. It was the final English draft for translation into the Maori tiriti. So of course it would not be signed.)

In his latest dereliction of his duty of balanced reporting, Moon uses Allan Titford’s conviction on personal charges to declare all of his claims of state document tampering and tribal harassment a “fallacy” .

Bit of an own goal there, Paul. By using that term, you simply remind us of your fondness for red herring fallacies, including ad hominem attacks and poisoning the well.

For years, Allan Titford and his many supporters fashioned a dystopian and blatantly racist vision of New Zealand’s future, in which avaricious Maori tribes, together with obsequious politicians, would slowly but surely trample over private property rights.

Which, of course, is exactly what the state did in forcing Titford off his Maunganui Bluff farm, despite a string of politicians from Lange to Key promising the country that no farmer would ever lose his land to a tribal claim.

Again, our resident honest journalist Mike Butler poses some tricky questions to yet another lopsided commentator.

Historian Paul Moon asks, in alleging jailed farmer Allan Titford’s mania fed a racial rift, where was the public defence of Te Roroa people who were vilified by Titford?

Here are some questions for Moon: