Letter from Allan Titford’s doctor saying Titford found
sex painful at the time his wife says he raped her.

Titford family friend Martin Doutré says that if Allan had had a fair trial, this doctor’s letter saying he found sex painful in the first six years of his marriage would have been presented.

So would various cards from Sue to Allan that make it hard to believe her claim that Allan abused her for the whole 22 years.

It’s certainly true that after I received your list of accusations against Allan in September 2009 I was astounded, and wrote back a sympathetic response accordingly.

On the surface of it, I had to initially accept you at your word and respond with appropriate sensitivity. It was the same case for Ross Baker and many others.

But then some serious cracks started to appear in the plasterwork.

There are a number of things that you’ve very conveniently left out of your story, which should have been raised and discussed fully in a court of law.

One of these relates to the alleged rape charges, and Allan’s ability or desire to commit that kind of act.

Now, I know that this subject matter constitutes a veritable no-mans-land, where no bloke is allowed to venture with an opinion, or have any kind of dissenting point of view.

In the standard list of accusations that a man is obliged to wear in a matrimonial dispute, this one invariably sits near the top.

Under the very hazy definition of what now constitutes marital rape (i.e. “I didn’t want it that night – but let it happen against my will”, most married men have been ‘raped’ by their wives – including Allan Titford.

So, for the elucidation of the jury, perhaps you should have mentioned:

(1) You were unable to conceive by any natural means, although you strongly desired children, and suffered disappointment in this regard for about the first 5 years of your marriage.

(2) You attended or consulted the Natural Family Planning clinic in an effort to optimise your chances of conception, which, of course, meant that Allan had to stand at the ready to perform his duty when you were at peak fertility.

(3) But, as you well know, Allan had a serious problem with his ‘man-gear’ due to a not-uncommon physical condition that plagues a fair percentage of men.

It’s called ‘Frenulum breve’and anybody interested in researching the condition can look it up on the Internet.

It means that once the penis is expanded and subjected to sexual activity, a rupture and bleeding can easily occur, accompanied by intense pain and ongoing discomfort.

Once such a tear happens to the man-gear, no further sexual activity is possible until the torn tissue fully heals.

Also, those unfortunate men suffering from this condition of extreme sexual pain (dyspareunia) must be forever vigilant to ensure the ruptured region is cleansed daily.

The stringent regime entails the application of medicated creams to forestall the onset of disease, leading to further painful complications.

(4) Despite the fact that Allan’s Catholic faith forbade the use of fertility drugs as an aid to conception, you went to Dr. Langley of Dargaville and were prescribed them.

This led to your first pregnancy.

(5) Dr Langley gave you a large batch of these drugs, and all of the pregnancies, it seems, were the result of taking fertility drugs.

(6) Shortly after Alyssa was born, and while you were carrying James, Allan was obliged to see Dr. Kevin J McKerrow of the Artemis Centre, 2 Pupuke Rd., Takapuna, regarding the on-going painful condition of his man-gear.

“Thank you for referring this gentleman who is uncircumcised.

He has been married for the last six years, and on erections he has a painful penis. The B.I.D use of Nizoral cream has controlled the problem.

On examination, there was superficial erosion of the corona most consistent with that of candidia balanitis. The other condition to be considered would be that of lichen sclerosus et atrophicus.”

After discussing how to best proceed, Dr McKerrow further wrote:

“I have commenced him on a course of Itraconazole 200mg daily and if the problem persists despite this, then I feel that circumcision should be considered.”

Indeed, the painful problem did persist and worsened, beyond the birth of the fourth child, Shiane, and by 1998 Allan had no other recourse but to have the circumcision operation, which was undertaken at Launceston, Tasmania, Australia.

For Allan, ‘rising to the occasion’ to service a wife who was obsessed with breeding, was, for the most part, a less than satisfying experience and was often excruciating, as well as fraught with consequent, on-going pain.

With regards to this persistent problem, Allan confided in a number of friends, including his equally dispossessed (due to the fraudulent rulings of the Waitangi Tribunal) farmer, Don Harrison.

After the operation in Tasmania, Allan’s mother, who was a nurse, commented that he should have had the condition rectified years ago.

In addition to all this, you [Susan] accused Allan of rape on a day uncertain in the months of September and December 1987 at Dargaville.

But then, strangely, you gave Allan a very mushy Valentine’s card in 1993, followed by an Anniversary Achievement Award dated the 20th of June 1993.

So, we’re now led to believe that this “raped” and “beaten” wife who is “terrified” of the brute for whose lecherous gratification she is reduced to the lowly role of a sex-slave – and who she (now-belatedly) claims burnt down the family home and left her homeless in 1992 – sends the following mushy card to him in 1993: 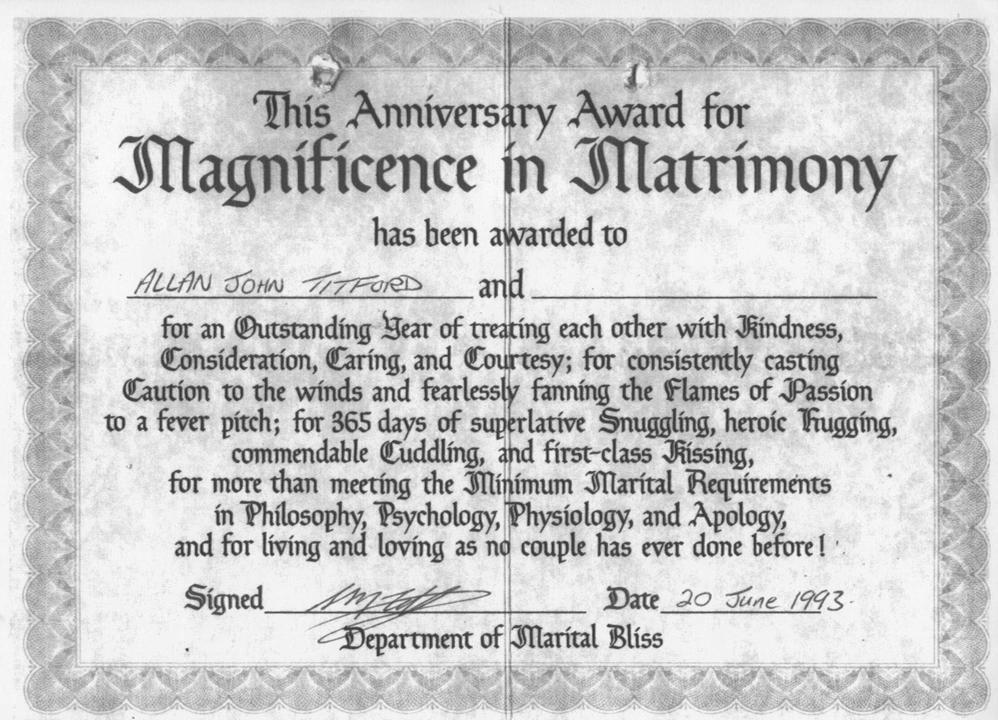 This is but one of several such endearing cards that Susan gave Allan. Sue tells Allan she is “so happy to have you as my husband”
on their anniversary in 1988.

Sue told the police Allan raped her some time in late 1987.

From a woman’s perspective, Marcian comments:

‘Would a battered wife really go to this trouble? I don’t think so.

You would make an excuse of, “Oh is it our anniversary? Sorry, I forgot all about it – what with being mother of a 15 month old & 8 months pregnant with a second child … Sorry dear.”

No, Susan makes an effort.’