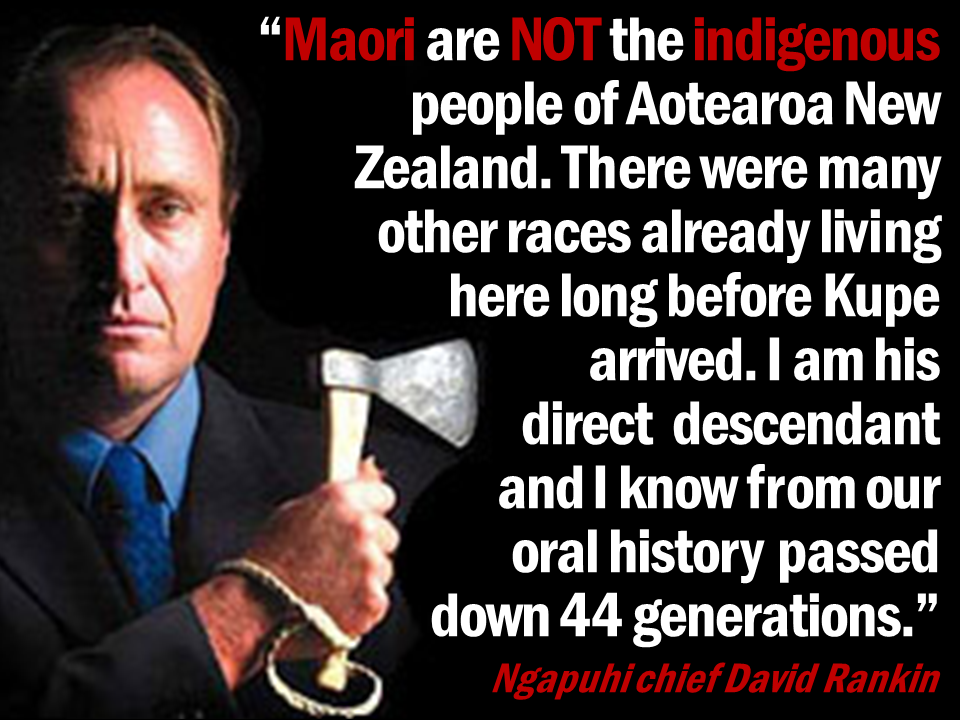 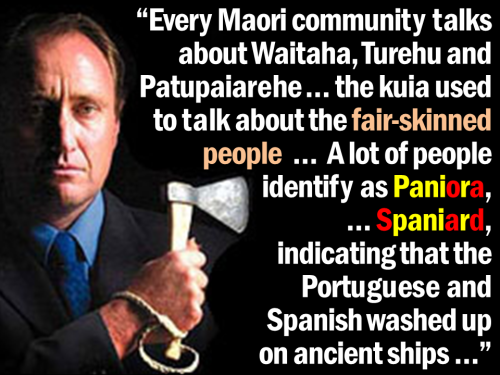 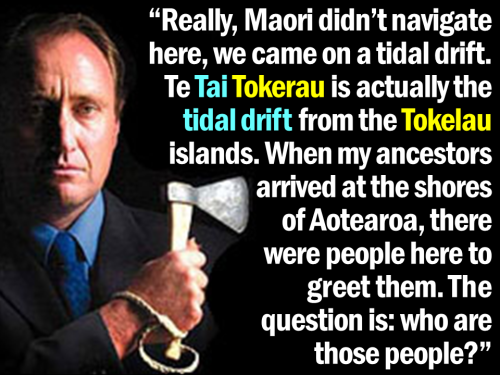 “You recently voiced support for historians who claim that New Zealand was settled much earlier than commonly accepted. Are you merely supporting free speech and political incorrectness, or do you genuinely believe that there were other civilizations here in NZ before the arrival of Kupe circa 1250AD?”

“Let me just start off and say this, Maori are not the indigenous people of Aotearoa New Zealand. There were many other races already living here long before Kupe arrived. I am his direct descendant and I know from our oral history passed down 44 generations.

I believe this needs to be investigated further because every Maori community talks about Waitaha, Turehu and Patupaiarehe. This goes hand-in-hand with the other research.

As Maori, we have come to a time of maturity where we need to debate these issues. I want to get to a genuine consensus about this issue, although I think academics want it to disappear. If we start talking about it and investigating it, it’s an exciting opportunity to explore.

My ancestors like Kupe came to the Hokianga in search of other people. In the Waima ranges, there was a pipi shelter on the mountains, and the kuia used to talk about the fair skinned people up there.

A lot of people identify as Paniora (translated as Spaniard), indicating that the Portuguese and Spanish washed up on ancient ships in Northland.

In 2002, I went to the Austronesian Leaders Conference in Taiwan and we discussed similarities with Taiwanese Aborigines. We traced our origins and the Maori and Polynesian connection to China.

All the leaders such as myself and Matiu Rei, Aborigines, Solomon islanders, Rapa Nui and Hawaiians were all interested in early settlement theories. There is a lot of writing about the whole ancestral link.

Really, Maori didn’t navigate here, we came on a tidal drift. Te Tai Tokerau is actually the tidal drift from the Tokelau islands. When my ancestors arrived at the shores of Aotearoa, there were people here to greet them. The question is: who are those people?

It goes hand-in- hand with our oral history. There are questions written by Ian Wishart, Noel Hilliam and others that need to be answered.”

Elocal has championed the quest for more openness on pre-Maori settlement in New Zealand. The case is well-summarised in a recent story by Raynor Capper on the Waipoua Forest stone city subtitled Undeniable Proof of NZ Civilisation Before Kupe.

Most interesting to me is National Archives’ 75-year embargo of evidence found in a three-year state investigation of 500 acres of the 25,000 acre historical treasure trove in the 1980s.

Is the idea of a pre-Maori stone city in the Waipoua Forest the ludicrous fantasy of nutters, as  our haughty Appeaser-General Chris Finlayson claims?

If so, why must we wait until 2063 to see what state investigators found there in the 1980s?

“What do you think the ramifications would be if Maori appeared not to be the indigenous people of New Zealand?”

“That would put all our treaty claims in question and our indigenous rights at the UN. It would open up a whole can of worms. I do believe if we start approaching it the right way other Maori would be keen to discuss it.

I think there has been a rot been allowed to set in to Maoridom since the Lange government took power in the early 1980s.

In many ways, all the changes that have taken place have taken the basic responsibility away, their mana, from being true Maori, like working for a living, educating themselves and their families, leading strong lives and observing the laws of the land.

If you are able to work then work! Help your fellow Maori and Pakehas be successful in life. Being Maori — and, let’s face it, you only need to be 32% by government standards — does not mean you need to take the easy way out and have your hand out.

I have never taken anything from the government, I am self made, strong and I say stop the funding. Maori need to return to the warriors they once were.

It may be hard at first but intergenerational beneficiaries are embarrassing to my culture.” 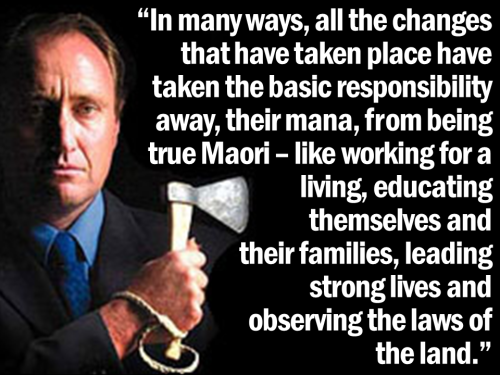 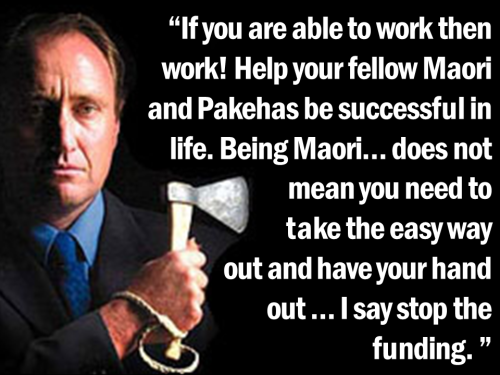 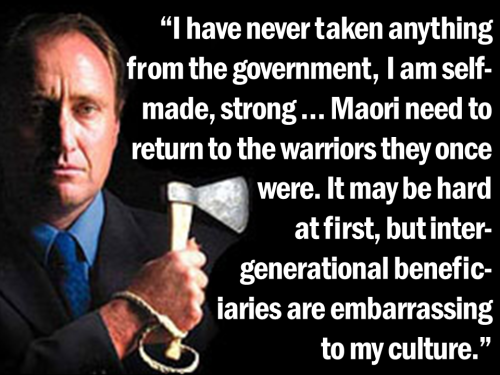