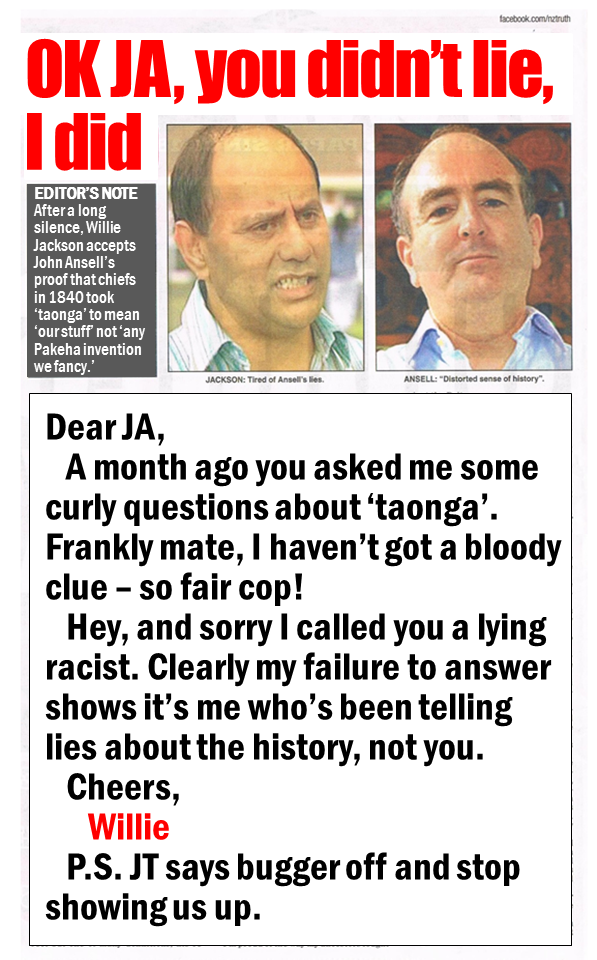 If you’re wondering why my page 2 stoush with Willie Jackson in Truth has ground to a halt, so am I.

Hopefully posts like this will gee Willie back into action, and that his emailed vow to “resume our contest” is genuine.

As Willie is learning, when someone publicly calls me a liar, I don’t let go until I’ve proved them wrong — publicly.

But I should say that Willie is remarkably civil to me in person, as the above exchange shows. He gave me a pretty fair hearing on Radio Live too.

His mate Tamihere, however, is still sore at me for exposing (on their Waitangi Day show) his habit of leaving out parts of the history that don’t suit his Griever agenda.

As a result, he was less than keen to have me as a guest on the show, and is even less keen for Willie to keep engaging with me now.

To give two examples, he’d been saying that the British executed over 100 surrendered prisoners in Poverty Bay. I had to ring up to remind him that it was a loyalist Maori, Rapata Wahawaha who did the shooting (as utu for a tribal feud) — in defiance of British policy.

He also tried rather pathetically to minimise the Taranaki genocide of the Moriori by saying it was a Pakeha captain that took them to the Chathams.

I had to remind him of three tiny details:

Anyway Willie, if you’re reading this, don’t get angry, get even — with facts this time, not insults.

Do get writing soon, because my next post won’t be this namby-pamby.

This week, I respond by tallying the insults, conceding that Willie is the superior abuser, then putting up screeds of evidence that I invite him to match… 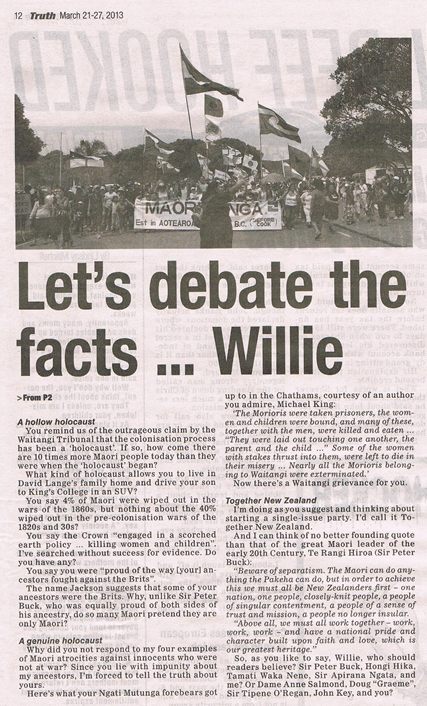 Every column by Willie is like a gift from God, so I slipped in some questions to make sure he replies. It will be interesting to see how he avoids answering them.

My column did not appear exactly as I wrote it, so you may prefer to read it here: END_OF_DOCUMENT_TOKEN_TO_BE_REPLACED

After reading the above opinion in last week’s Truth, I phoned editor Cameron (Whaleoil) Slater to say I was surprised he’d be party to smearing as a racist a person who advocates racial equality.

As a result, the following twice-as-spacious alternative opinion dominates page 2 of this week’s issue:

It’s not so much that Willie Jackson lies with impunity (and immunity, judging by the years of free airtime and column inches he’s had to spout his filth) — it’s that, on Treaty matters, he hardly ever tells the truth.

He doesn’t tell it mainly, I suspect, because he doesn’t know it.

(With no pushback, he’s never had to learn.)

So if we’re going to teach the public what really happened in the past — and how they don’t need to feel nearly as guilty as they’ve been told — we’ve got to push back against every one-eyed con artist like Willie.

Thanks to Cam Slater for giving me the right of reply.