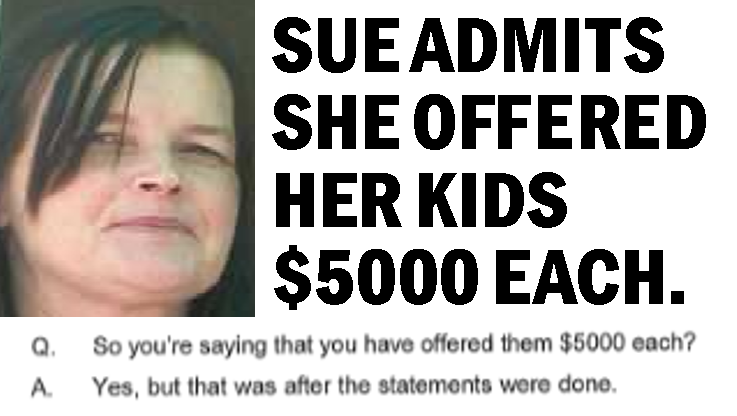 Questions and Answers from the court transcript of Allan Titford’s trial.

Last Saturday, I visited Allan Titford in his new home of Rimutaka Prison in Upper Hutt. I will be going over the hill again tomorrow, and hopefully every Saturday until I find a good reason to abandon him to his fate, or until he is released.

(Or until someone tampers with my brakes.)

So far, all I’m finding is more reasons to support him. I’m finding evidence of Sue Titford and her family having told lie after lie. The above conflicting accounts of whether she bribed her children is just one such example.

Sue admitted she did offer them $5000, but not as a bribe to testify for her.

But at the same one-sided trial, the kids were evidently unaware that she had admitted doing this, so each proceeded to lie that she had not offered them any money at all.

From a statement written by Gene Hanham on 2 February 2011.
Hanham, along with many others who speak well of Allan,
including Sue’s own brother, was not called as a witness.

He was surprised when I told him that Sue had said their father had confessed to burning down the house, and wondered aloud whether Sue might have done it herself.

This is what he had to say about the sister he has known all his life, and does not trust to tell the truth:

“I dont know what evidence the other famly members have said about Allan, but what I think is: Sue would have had input into all their testimonies.

As for slavery, I have video of them on holiday, as they went just about every year while Allan was still at home working the farm.

Sue was the one who was telling our parents that Allan wants them dead. She was always telling them that as mum and dad would tell me so.

Just let me know if I can help. Like I said I’ll be happy to tell my side of things Sue and her famly have done to me.”

Bear in mind that Sue is a self-confessed liar. She was given immunity by the government from prosecution for perjury. This was on the grounds that she lied for Allan for 22 years because he would have beaten her up if she had not.

I say she is lying about that.

Either way, she is clearly capable of lying, for whatever reason.

(And why, you might well ask, would the state want to get involved in a marital case — unless it wanted to punish the man who had done such a good job of exposing state corruption?)

Last Saturday, as Allan Titford sat with me in his orange prison boiler suit, he shook his head and said, “I never would have believed I could end up somewhere like this.”

So disillusioned has he become about the New Zealand so-called justice system that he’s renounced his New Zealand citizenship and that of his new son, Leo, under the law of sui juris.

Now I don’t claim to understand that law. But he does, and I can’t say I blame him for disowning the country that has persecuted him so mercilessly for over half his life.

At the moment, Allan is due to have his appeal heard in June. But having been stripped of his assets, he is again reliant on the state for legal representation.

And as happened before his trial, his legal aid application is again being stalled, so his lawyer will have next to no time to prepare. Last time, the approval came so late that the first time he met his lawyer was on the first day of the trial.

How can that be called a fair trial?

Not only that, but his most inept North Shore barrister, John Moroney, refused to even visit Allan beforehand. This was absolutely necessary, since the state had banned Allan from travelling north of the Waikato — supposedly to stop him from menacing certain Northlanders, but more likely to stop him from maintaining his farm.)

John Moroney also failed to challenge the children on why their testimonies, above, conflicted so markedly with their mother’s. Am I really the first one to have noticed this?

Please send the information on this blog to as many good Kiwis as you can, and let’s see if we can find a decent MP or benefactor who is prepared to help get him out.

It will take someone with rare courage and commitment to fairness, given that Allan has been so effectively demonised as a monster by his former wife and former government.

12 thoughts on “The Titford trial: a badly-orchestrated litany of lies”